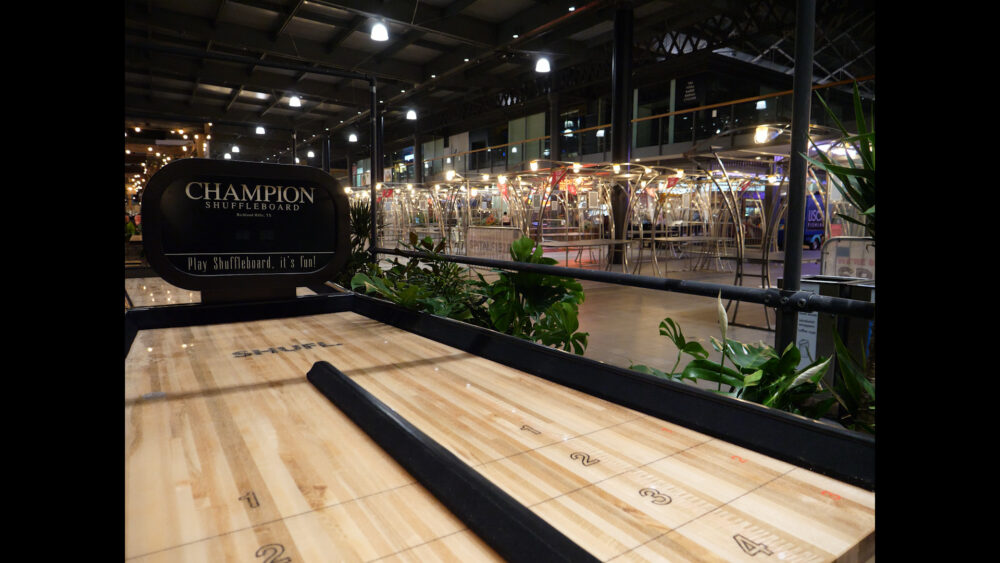 Looking to let off some steam after a hard day at the office?  We’ve got you covered with our round-up of the best shuffleboard venues for after work socials.

Workers in the Big Smoke can head to Shoreditch to Players Social, which is made for playing away the stresses and strains of a busy day.  Situated in Spitalfields Market, they even have ready-made shuffleboard socials every Tuesday from 7pm.  With seven tables and three Bank Shots that’s a grand total of 418-feet of shuffleboard fun! As well as shuffleboard, they have a host of other games such as Ping Pong and Foosball, so there’s plenty to keep you and your colleagues entertained.  When you’re tired of playing, you can eat your heart out with burgers, pizzas and salads accompanied by cocktails, wine, or craft beer.

Over in Hammersmith, The Prince of Wales Townhouse is a beer and food destination from Big Smoke Brew Co.  You’ll find two of our 14ft tables and if you head over on a Monday to banish the work day blues, they’re free!  We call that a great start to the working week!

And that’s not all!  They even have a dedicated ‘work and play offer’ for £15 – work from the pub and play after work – including unlimited tea coffee and soft drinks, a sandwich and fries from the menu, high-speed Wi-Fi, quiet stations, power points and a pint or a G&T when you’re done for the day.  Now that’s what we call an after-work social!  Why not switch up your scenery and find some new co-workers to slide a few pucks with.

Bracknell-based employees should head down to the Admiral Cunningham, Bracknell which has been run by the Levey family since 1996 and has a loyal local following.  It offers a host of different spaces from covered outdoor decking to a snug, garden room and lounge bar, to name a few. They’ve got a 14-foot shuffleboard and a jam-packed calendar of social events featuring a line-up of live DJs, sizzling seasonal events and quizzes.  So, bag yourself a booking on the shuffleboard and come join the fun.

In Norway’s capital city, Oslo, Telegrafen is a prestigious venue geared up for the local business community giving them somewhere to meet, eat, drink, play AND work in style in the heart of Oslo’s city centre.  Norway’s former telephone exchange, Telegrafen brings people together inside a beautiful 3200m2 historic building, constructed in 1924 at Kongens gate 21. As you’d expect, after work socials are right up their street with six different event venues catering for anything between 8 and 100 people.

Also in Oslo, Royal Gastropub, opened its doors in January 2022.  This one is definitely one for your destination list at the end of a long day at the office, as it is housed in the Kongen’s old waiting room (Kongen is Norwegian for King) in Østbanehallen – Oslo’s largest transport hub, next door to Oslo Central Station and Jernbanetorget. Grab yourself a beer and a set of pucks and get a game in on one of two SHUFL. 22 footers.

The owners of the Royal Gastropub are the same people behind the renowned Amundsen Brewery, Oslo’s largest microbrewery, so as you’d expect there’s a good selection of Amundsen beers too. Royal serves about 20 different beers on tap and around 50 different varieties by bottle. They are also serving up tasty dishes, which can be savoured in its a huge beer garden fit for a King seating up to 200

Beef up your after work social in Copenhagen

In Copenhagen, make cocktails, burgers and shuffleboard the order at the end of the working day at hip cocktail bar and burger joint Cocks & Cows in Amager.  They beefed up their Eat, Drink, Play offer by adding a beefy shuffleboard offer to their incredible food and drink line-up.

These guys don’t do things by halves and they’re showing some serious shuffleboard love, having installed no less than four of our 18 ft Grand Champions in a dedicated room complete with funky shuffleboard neons.   Forget the cares of the day and kickback with a cocktail from the well-stocked cocktail bar and order mouth-watering burgers, salads, snacks and fries. Cocks & Cows also offers a local takeaway service and for groups looking to party, the venue offers some great space for up to 70 guests.

Fancy a beer, after hours?

Another pop-up office option is beer bar Miss Hops , Bochum, West Germany. It has a coworking space with plenty of beer on tap and a stack of burgers, and no need to ask where to go for the after-work beer!  Rest assured that these guys know their beer with a range of different beer styles on offer from popular pils to pale ales and porters to stouts.

After a productive day in this cool location with Wi-Fi, water and coffee at hand, you’re not going to want to leave, so change up the pace and jump on their 14-foot shuffleboard table and slide some pucks with work friends. Definitely, our kind of office!

For more inspiration on where to play shuffleboard for your after work social, check out our venue finder.