Where to play shuffleboard in Australia 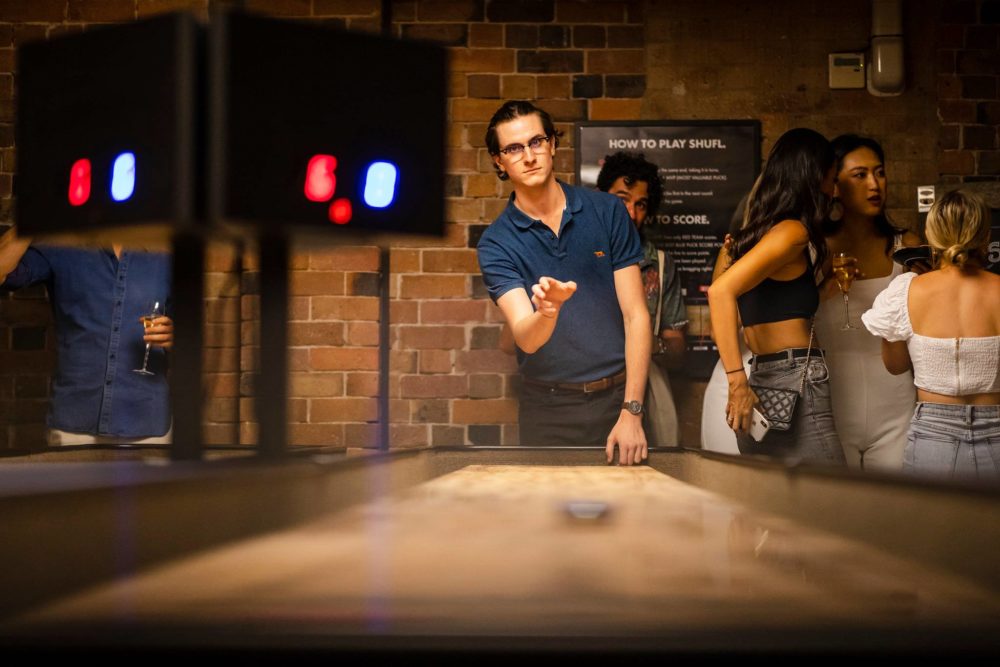 On a mission to win over Australian hearts and minds, SHUFL arrived Down Under in 2019. Persuading a nation of sport lovers to embrace a competitive, fun game of skill like shuffleboard was never going to be too much of a challenge – but, as you know, we love any challenge!

Fast forward a year and here’s our first guide to where to play the best shuffleboard in Australia, spotlighting some of our amazing early-adopter venues who know what’s good for their business.

First to embrace the SHUFL curve was the new-look Surfers Paradise Beer Garden, Cavill Mall, on the Gold Coast.  Originally built in 1925 by hotel entrepreneur James Cavill, this legendary venue was completely re-developed with an open roof to let in some of that Gold Coast sunshine.  They added screens to catch the match of the day and created an ‘adult playground’ with a host of games including two of our finest Grand Champion 22ft shuffleboard tables and a life-size pool table where you kick the balls. Definitely our kind of fun!

Keeping it Queensland, Hotel HQ Underwood and The Royal are both Australian Venue Company hotels that have signed up for the SHUFL experience.  Hotel HQ is a modern hotel in Underwood, within easy reach of retail outlets and downtown Brisbane. It has a restaurant, sports bar, gaming room and now guests can kickback with a cold beer and a game of shuffleboard on the mother pucker of all tables – our 22ft Grand Champion.

Sister hotel, The Royal, Nundah in Brisbane, is a must for lovers of Italian food and jazz featuring an Italian restaurant and a lounge that transforms into a Jazz Club every Thursday.  Now all that’s left to do is to grab a cocktail, pucker up and get competitive on their shuffleboard tables.

Oche is hitting the bullseye by serving up premium cocktails, mocktails and beers alongside gourmet bites such as burgers, sharing platters, and pizzas, all designed to be consumed in your Oche booth.  Great fun for groups – the venue caters for parties of up to a whopping 300 – each booth can accommodate up to 12 players.  You’re spoilt for choice with five different games to play, which the electronic system guides you through and then scores automatically.

Finished your game of darts?  Did we mention The Terrace and The Next Level upstairs, where you can master our SHUFL curve on four free-to-play, premium shuffleboard tables?  Alternatively, swing by on a Wednesday to take part in their regular SHUFL tournament from 6.30pm.

Down in Victoria, in Footscray, Melbourne, you’ll find yummy vegan eats accompanying two 22ft Grand Champions waiting for you to slide down at dog-friendly bar Lickety Split (we just love the name!).  Head here to catch up with your crew over beers, cocktails, mocktails, while becoming part of their laid-back vibe.

Still in Victoria, you can slide into Dromana on the Mornington Peninsula and stop off at Jetty Road Brewery.  These guys are serious about their beer but don’t take life too seriously – that’s a philosophy we can all relate to.  So, it was only a matter of time until two of our full-size Grand Champions found their way into their brewery taproom.  Beautiful beer and a beautiful game – a match made in heaven!

There’s always time for one more game of SHUFL, this time watching the sunset over in Western Australia at The Breakwater in Hillarys Boat Harbour.  Spectacular sundowner cocktails, mouth-watering burgers, seafood smorgasbords, sharing platters and high teas – not to mention the fine dining restaurant upstairs – are all good reasons to visit but you can also keep it simple with a game and a beverage.  Choose to shoot some billiards or puck off on two of our finest shuffleboard tables – we know which one we’d vote for!