The European Shuffleboard Championship is coming to London 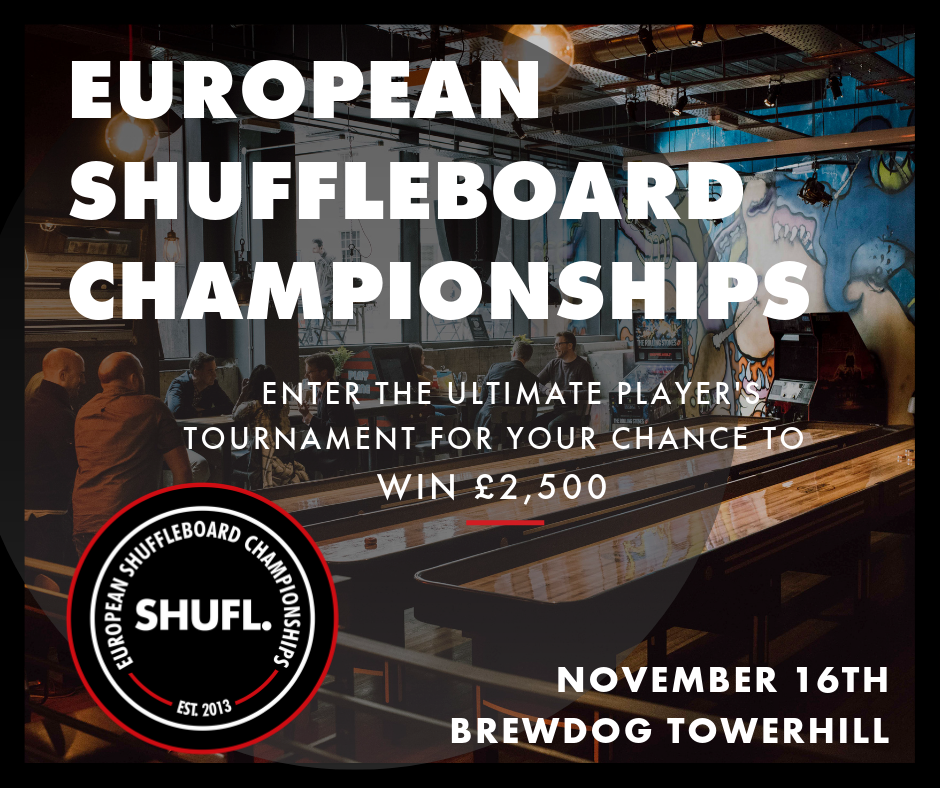 As the only dedicated UK shuffleboard brand, we’re excited to announce that SHUFL will be hosting the sixth European Shuffleboard Championship in London for the first time ever this November.  The championship will be hosted at BrewDog’s Outpost Tower Hill on Saturday 16 November 2019 and will see 40 contestants competing to be crowned European Shuffleboard Champion with the chance to scoop an impressive £2,500 prize.

Established in 2013, the championship is the ultimate European shuffleboard player’s tournament and has historically attracted amateur players from all over Europe.

Says BrewDog Tower Hill General Manager, Rob Woolford: “We’re excited to be hosting the UK’s first major shuffleboard tournament on our Tower Hill 22-footers. We host our own monthly tournament and have built up a dynamic shuffleboard player community.  It’s great to see SHUFL taking the game to new heights, giving the UK shuffleboard community a chance to compete on a European stage for a serious cash prize.”

SHUFL Marketing Manager, Samantha Catford comments: “Bringing the European Championships to the UK for the first time shows just how significant the UK shuffleboard market has become.  We now have more than 100 SHUFL tables in pubs and bars nationwide and exclusive partnerships with the leading UK pub companies.”

“We’re delighted to give our burgeoning UK player community the opportunity to compete in the biggest tournament to date on home soil.  It’s set to be a great showcase event for this ultra-competitive, fun pub game.”

Puck off will be on Saturday 16 November at 11am with the final scheduled for 9pm. A pre-event warm-up and social will take place at BrewDog Tower Hill on Friday 15 November from 6pm.  Forty players will compete on four tournament-grade 22 ft Grand Championship SHUFL tables and are guaranteed to play a minimum of four games in the group stages.

Tickets are priced at £50 and can be purchased via Eventbrite. A ticket includes two complimentary drinks, a BrewDog buffet, a SHUFL swag bag of goodies and a 25% discount on all additional drinks purchased.