UK shuffleboard culture: How it has become part of the UK social scene 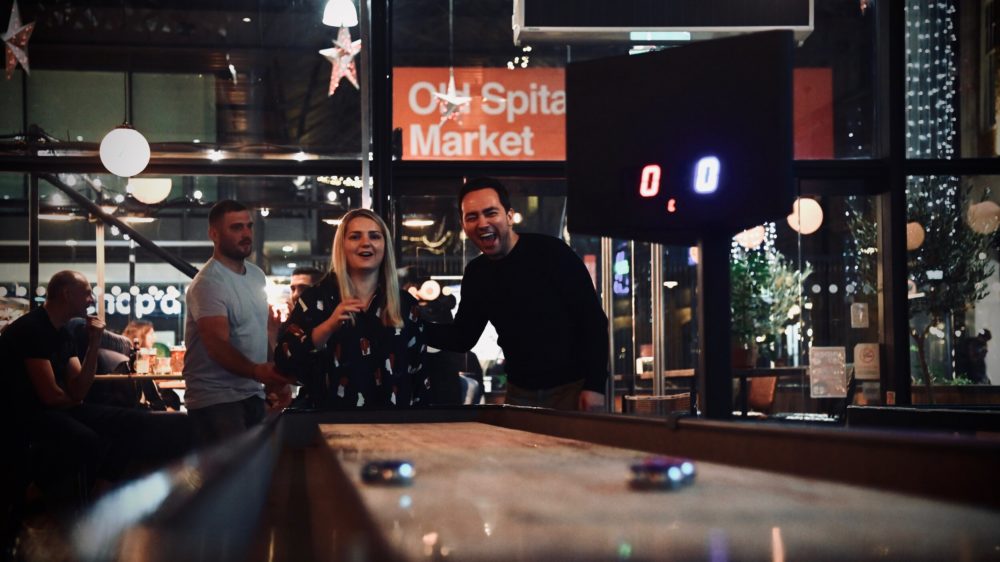 We take a look at the UK shuffleboard culture! From being relatively unheard of in the UK a decade ago, today shuffleboard has become a popular choice for pub and party goers in the UK looking for a memorable night out. In the last five years, competitive socialising activities have sky-rocketed and become a big deal on the UK social scene.

We caught up with SHUFL UK Key Account Manager, Ryan Hurley, to find out why shuffleboard has become such a hit in the UK.

“We’re seeing the evolution of the typical UK night out, with socialising no longer centred around alcohol, but an activity instead. It’s increasingly about finding a memorable and inclusive experience for a big group of friends, while sharing drinks and making memories around that.

“There are several types of venue catering for this.  We’re seeing a massive increase in competitive socialising specialist venues in the UK, such as Boom Battle Bars, Roxy Ballroom and Lane 7, to name a few.  Pubs and bars with social gaming activities and complete eat, drink, play experiences that include great bar menus featuring high-end cocktails and craft beers and distinctive food offers are also capitalising on this trend.”

“I’ve been lucky enough to work for SHUFL for four years and have seen the competitive socialising scene take off from humble beginnings! SHUFL has certainly been a pioneer in the competitive socialising and hospitality sector.  Having proven the popularity and success of the concept in Scandinavia first, we had the perfect experience and expertise to introduce shuffleboard to the UK and build a strong community of players in the last decade.

“Shuffleboard is an authentic, inclusive game that is easy to play but hard to master. The rules are designed to create big, exciting moments which creates a great atmosphere. By adding our famous SHUFL Curve to the playing surface, the game becomes even more engaging and from speaking to hundreds of players across the UK, that is the feature of the game people love the most.”

“I first discovered the game in a hotel and so it’s certainly a great addition to any lobby. Increasingly shuffleboard is becoming an office favourite as well – it’s a really good team building game and much quieter than ping pong.”

“It’s around 200 SHUFL tables and counting now, with more and more being ordered every week. Once someone experiences the game for themselves, we usually get a call straight away!”

“Demand is higher than ever before and I’m extremely confident there’s a lot of longevity in the game. Part of this has already been demonstrated in Norway & Sweden where our SHUFL tables are more popular than ever 15 years on from first being installed. The game isn’t a gimmick, but something people become really invested in playing and that authenticity is key to long term success – it’s 100% here to stay!”

“It’s a tough one but my top three would have to be:

“Players Social in Spitalfields Market, is an amazing location in London with seven SHUFL tables and great food and drink. They hold a regular tournament on Tuesday night and have introduced countless players to the game.

“The Box, Deansgate has two full size 22ft shuffleboards in the heart of Manchester. The Box is an award- winning bar and our tables are at the heart of their offer.  The cocktails aren’t too bad either!

“The Black Parrot, London is a speakeasy rum bar with world class cocktails and an 18ft beauty as the centre piece, it’s a personal favourite of mine. The Black Parrot is one of London’s best kept secrets!”

“Only to say that if you’re interested in a board or in joining our community of players by finding out about your nearest tournament or event then don’t hesitate to get in touch with us via our website or Instagram.”