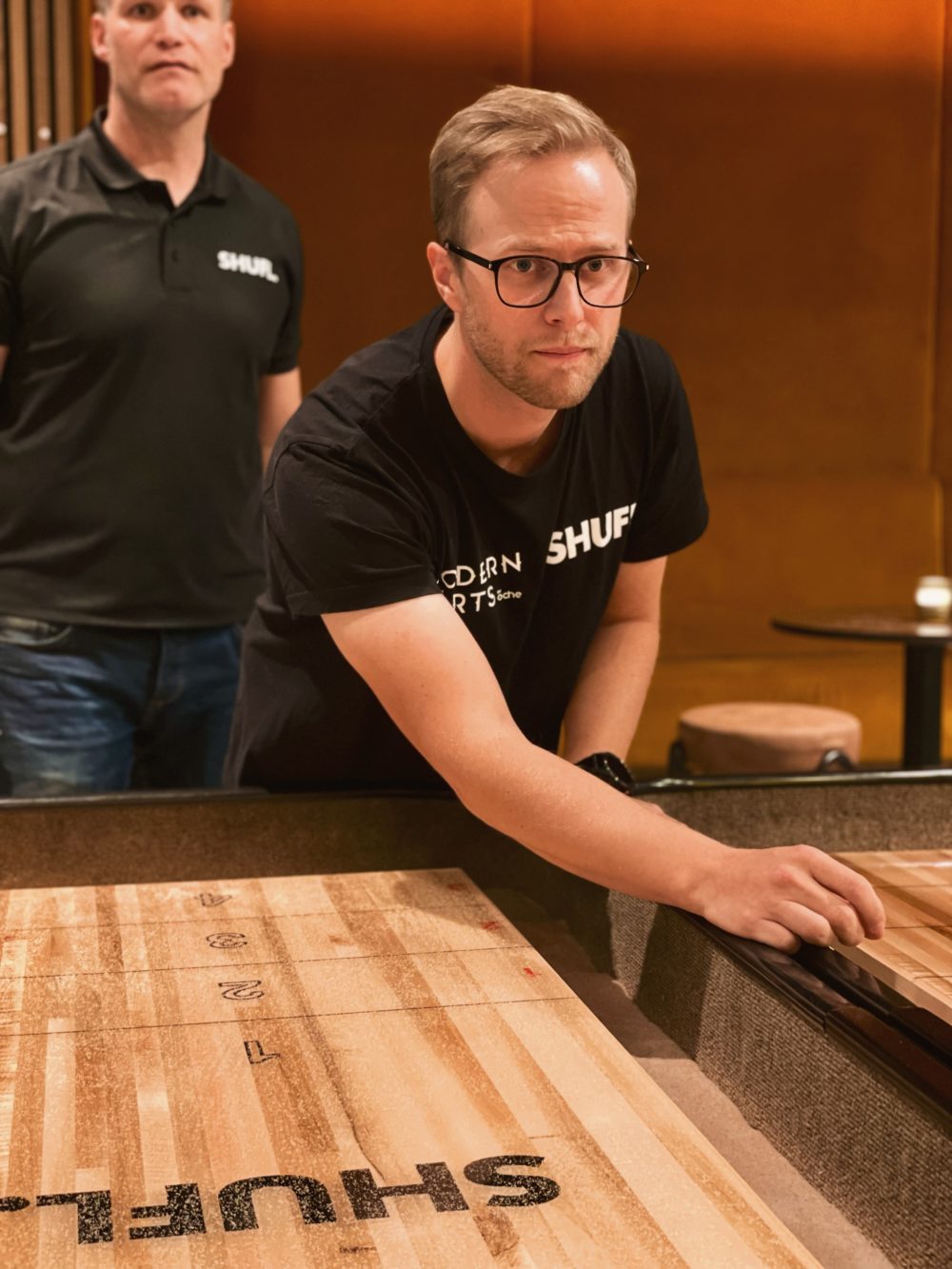 Shuffleboard in Norway is a big deal. As well as being the home of SHUFL. HQ, since its introduction a decade ago, it’s redefined the social scene and become a huge part of the going out culture.  As a consequence, they have some of the best shuffleboard venues in the world.

We caught up with SHUFL. Norway Country Manager, Martin Vea, to find out why shuffleboard has been such a hit with the Norwegians.

“Your typical night out really depends on how old you are. Alcohol is expensive in Norway so usually young people go to a private house party and stay until around 11pm before going on to the local bars – this is what we call ‘forspill‘ in Norwegian or pre-drinks.  Lately, social gaming venues have become popular in Norway and other Scandinavian countries.  People don’t want to just sit down and drink; social gaming gives them something else to do. The older generation, (30+) tend to skip the house party and go straight to the activity itself. This means people are going out earlier.

“When it comes to where to go out, the change has been massive. I would say that seven to ten years ago, nightclubs were the places to go for a night out in Norway. There were different clubs for different ages with different types of music and this would determine who would go there. But now, social gaming is at the forefront, people want to participate in different activities, such as shuffleboard, on nights out instead. In fact, I would go so far as to say that almost every new venue opening in Norway offers some sort of social gaming activity for their customers.”

“Generally, I would say Norwegians are pretty reserved – so for us, to be able to do something different, have a beer in hand and participate in an activity, is great. I think one of the main factors behind the shuffleboard explosion in Norway was that we embraced it because it was almost like a relief for us! It enables us to have a good time together by sharing the shuffleboard experience, giving everyone a common topic of conversation.”

“The Norwegian shuffleboard movement started more than a decade ago. European Shuffleboard was established in 2010 by our founder, who had a bar in Oslo.  On the search for a new revenue stream for his business, he went to a tradeshow in the US and discovered shuffleboard. He then took it back to his bar in Oslo and it snowballed from there.

“Shuffleboard is something everyone can play and there’s always room to improve your game, which keeps people coming back for more.  Thanks to our unique SHUFL curve, you can try different shots; the pucks will always end up in a different spot, so you need to be creative with how you play. A game of shuffleboard is never the same.”

“You can find shuffleboard in lots of places in Norway such as hotels, bowling alleys and restaurants (chains and independents). Over the last couple of years, it’s become super popular in the corporate sector, with tables being installed in offices. This includes social spaces, canteens and meeting rooms. You’ll also find them in a lot of private cabins in ski destinations, as well as other holiday homes.”

“SHUFL. has installed approximately 500 shuffleboard tables in Norway.  It’s true that the full size 22ft tables are the originals and they look really impressive in large venues but a SHUFL. table will still be fun even if it’s our more compact 12ft version.”

“There’s still room for growth.  Until recently, it’s been mainly the hospitality market that has been buying shuffleboards – it seems that anyone with space has a table. Now, especially since Covid, we are seeing a big shift into the corporate sector.  Employers recognise that it’s even more important for employees to have a healthier working environment, which prioritises wellbeing.  Shuffleboard is perfect for helping teams to re-connect, encouraging people to take breaks and increase creativity and productivity.”

“There are so many good places to play shuffleboard in Norway that this is almost impossible to answer.  Honestly, my favourite place changes every month, depending on my mood, what type of food I want and what music I want to listen to. If I had to pick one right now, it would be Telegrafen in Oslo because its brand new and they have a really good beer and cocktail menu.”

For more information on installing a shuffleboard table in your venue or office contact us.  To find out where you can play SHUFL. in Norway check out our venue finder.