Our top picks for sports bars with shuffleboards 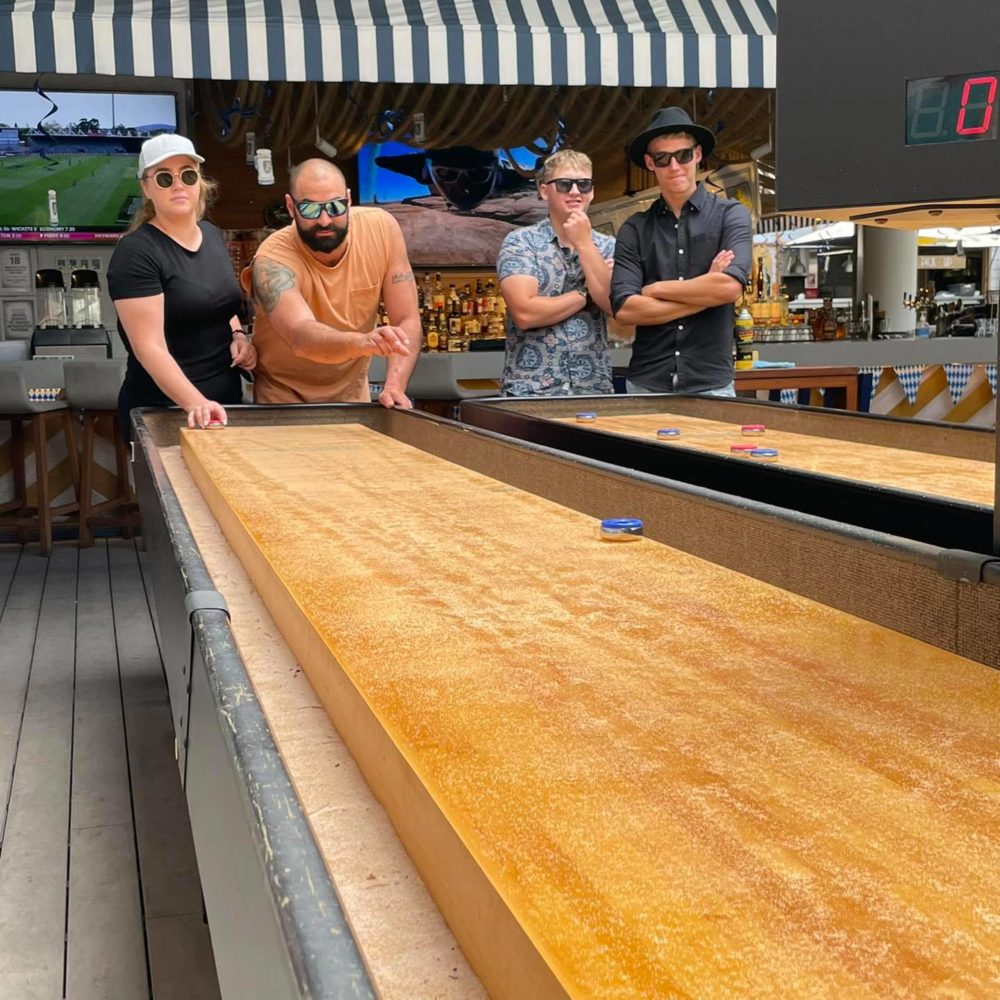 Whether home or away, sports fans who like to keep one eye on the ball and one on their puck with a cold pint in their hand, are going to love our top picks for sports bars with shuffleboard.

UK sports bar Matches in Ashford, Kent is “all about the social”, delivering a unique social experience featuring a raft of attractions, geared up for group bookings. There are self-pour booths with their own TV and a private-hire Match Box room with Karaoke, PS5 and Nintendo Switch games, including Call of Duty and Mario Kart.    A 12ft SHUFL. table takes pride of place in the venue’s window and there’s also interactive darts, beer pong and pool to extend your stay.

Over in Norway, sports fans who want to do the SHUFL. are really spoilt for choice.  First up, there’s the aptly named No1 Sportsbar in Arendal, known for their awesome burgers, for which the meat is ground in-house.  Can you think of anything better than homemade burgers, two 22ft shuffleboard and 12 screens showing three sporting fixtures at a time? Now, that’s what we call sports bar heaven!

Tordenskjold Pub & Bar in Kristinasund is another Norwegian big-hitter in the sports bar arena.  It brings you two Olympic sized shuffleboards along with Modern Darts and billiards – plus a complete line-up of food, draught beers and live music at weekends.  If you’re organising a social for your work mates or a teambuilding session with a difference, they can build a bespoke package featuring food, drinks and games.

With venues across Norway and Sweden, O’Leary’s brings Boston’s sports bar and restaurant culture to Scandinavia and has been an undeniable success with more than 130 outlets across 14 countries. The first O’Leary’s opened in Gothenburg in November 1988 delivering the American dream: an authentic, informal Bostonian neighbourhood sports bar experience that combines good food, drinks and sporting matches.  At their Trondheim venue there are four shuffleboard tables and a Bank Shot and you’ll find SHUFL. tables in 13 O’Leary’s venues across Sweden and ten in Norway.

Hopping across the water to Denmark, sports fans can head to Natcafeen, which translates as Night Café, to catch the latest sporting fixtures at the weekend, enjoy live music and be part of the buzz in the bar! Don’t leave without sliding some pucks down their 14ft shuffleboard table and check out their table football, slot machines and other bar games. If you’re staying out there’s a disco from 10pm on Fridays and Saturdays.

Further afield in Australia, if you’re looking to watch the next big UFC (Ultimate Fighting Championship) bout with your mates, then we ‘d recommend heading to Surfers Paradise Beer Garden, the official home of UFC.  This is an iconic Gold Coast venue where live sport gets top billing and nostalgic gaming go to the next level with two 22ft shuffleboard tables, giant Jenga, Connect Four and Foot-Pool, to name a few.  Once you’ve worked up an appetite, you can enjoy some big flavour food – locally caught fresh seafood, meaty pizzas and pub classics.

Sport socials just got hot!  Find out where to play SHUFL. near you here.