Your chance to represent the UK at SHUFL.Fest 2023 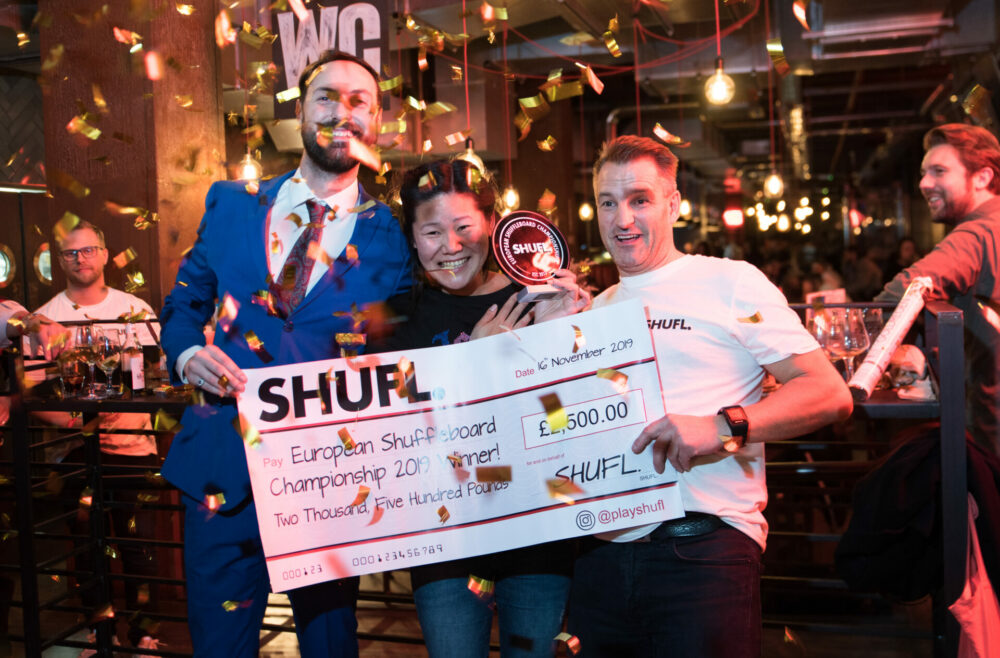 This is not a drill!  Manchester, London, Cardiff – your country needs you to play shuffleboard! The search is on for the UK’s mother puckers! Here’s your chance to represent the UK shuffleboard community at SHUFL.Fest, the European Shuffleboard Championship, taking place in Berlin at BrewDog Dog Tap in 2023.

We’re holding three regional UK qualifying tournaments! Our first stop was in Manchester and next up we have London and Cardiff.  Click the links below for more details and to book your place:

All qualifiers are doubles tournaments for teams of two on our Championship grade 22-foot tables, so grab a friend and book your place. Everyone is welcome, from seasoned shuffleboard players to those who have never played before.  We’ll be running free shuffleboard training sessions all afternoon prior to puck off.

The winning doubles team in each city will automatically qualify for a place at SHUFL. Fest, the European Shuffleboard Championship in Berlin next year.

Says Play SHUFL. UK Country manager Ben Minter, “We’re thrilled to be hosting three UK qualifiers for the championship.  For the first time in the history of the championships, it’ll be a doubles tournament to allow more people to play and mix up the competition dynamic.  We have a fantastic shuffleboard community in the UK and we’re excited to see who will be joining us in Berlin for the European Championship final.”

Stay tuned for more information on qualifying tournaments in other European markets and more details about SHUFL. Fest 2023.

The sixth European Shuffleboard Championship, which last took place in London in 2019, saw 38 contenders from Norway, Sweden, the UK, Denmark and Australia come together around four of our finest 22-foot Grand Champion SHUFL tables at BrewDog, Tower Hill.  After a day of hard-fought matches, the awesome Yvla Thorsrud, 35 from Oslo, Norway, the defending 2018 champion, demonstrated nerves of steel and outplayed her fellow competitors to lift the trophy, banking a cool £2,500 in the process.